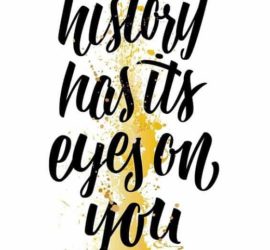 One positive of still recovering from COVID was the opportunity to watch the Broadway play, now turned movie, Hamilton: An American Musical, at two different points over the holiday weekend. I first had the privilege two summers ago in Atlanta when the Broadway show went on the road, and just like when I experienced it live, the movie of the taped musical was just as powerful. For those of you who might have missed all the theatrical hubbub over the last four years, Hamilton tells the story of American Founding Father Alexander Hamilton. Wikipedia adds that the play was inspired by the […]

Yesterday, I wrote about the transcendentals–goodness, truth and beauty, and how being aware of their presence around us enriches our life. But there is another aspect to the transcendentals that I want to draw your attention to. Primarily, to reflect upon which transcendental speaks most powerfully to your heart. Is it goodness? And seeing the good acts of others done in love and mercy and kindness and generosity? Or is it the power of a well-presented truth that empowers and encourages you to go out and make the world a better place? Or is it the beauty of some created […]