In the series finale of the epic fantasy television series, Game of Thrones, Tyrion Lannister, a character who throughout the series has been known for his insights and cleverness, argues for why Brandon Stark, who is now also the Three-Eyed Raven, should become the next King of Westeros. In a nutshell, Tyrion goes through all the many things that do NOT bring people together before pointing out the one thing that does–stories. Tyrion goes on to say: “There is nothing more powerful than a good story…nothing can stop it.” And Tyrion argues that this is why Bran should be king, […] 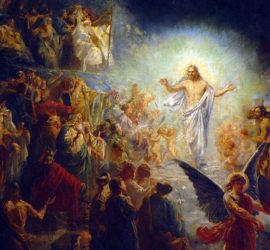 Happy Monday of the 2nd week of Easter! Had a full and busy few weekend that was bookended by two of the most anticipated pop culture events in the last decade as I went and saw Avengers: End Game… …and then watched the living battle the Night King and his army of the dead in the Battle of Winterfell in the final season of the Game of Thrones. So as to not give away any spoilers for those of you who may not have seen one or the other, let me simply share that in both of these stories, all […]