Christina’s degrees in history and theology, experience in the military, education, and defense industry sectors, and ministry and evangelization efforts with both youth and adults within the Catholic Church have given her a grasp and understanding of a variety of topics that she enjoys sharing with others-everything from Christ and the Sacraments to Prayer and the Saints to writing, Ignatian Spirituality, Cursillo and Evangelization to St John Paul II’s Theology of the Body and growing in the Moral Life as found in Harry Potter, the Lord of the Rings and Narnia.
She enjoys nothing so much as the opportunity to learn and grow while in conversation with others, so if you are looking for someone to speak to a group, lead a day of reflection or facilitate an overnight retreat, give her a call, she might just say yes! 🙂
Christina Semmens Speaker One Sheet
To arrange a presentation, contact her now

Topic: “Are We Boldly Catholic?” RCIA, the Sensus Fidelium and the Opportunities Before Us

Topic: From Maintenance to Mission–All Are Called to Evangelize

Topic: “What’s Your Story? The Convergence of Harry Potter, Your Life and the Gospel”

Slides below. (Due to file size, there are 3 parts posted for talk, and 1 for handouts)

Slides below. Each session is posted separately.
Session 1
Session 2 (1 of 2)    Session 2 (2 of 2)
Session 3
Session 4
Historical Fiction Books for Children 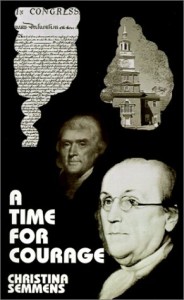 A TIME FOR COURAGE–Book 1 in the History Comes Alive Series
Tom Devaney is miserable at his new school. Teased by his fellow students, Tom is now assigned to be partners on a history project with one of his worst tormentors, JT Kennedy. While doing research at the library, Tom and JT suddenly find themselves outside the State House in colonial Philadelphia just prior to the writing of the Declaration of Independence.
As the two boys experience events straight from their history books and meet people like Benjamin Franklin and Thomas Jefferson, Tom and JT slowly become friends. But can their friendship stand the test of time?         Order the book from Amazon here 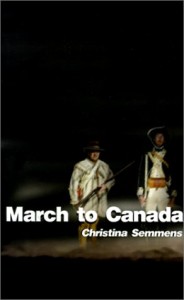 MARCH TO CANADA
Matthew Hollister longs for adventure. When he learns of the American military expedition to conquer Canada, Matthew is determined to join despite his father’s prohibition. After stowing away, Matthew becomes a member of the expedition led by Colonel Benedict Arnold. Along with Aaron Burr, Daniel Morgan and Morgan’s famous riflemen, Matthew quickly discovers that severe weather and many miles of desolate wilderness lay ahead. Out of supplies and faced by one obstacle after another in the wilderness, will Matthew and the expedition survive the march to Canada?      Order the book from Amazon here